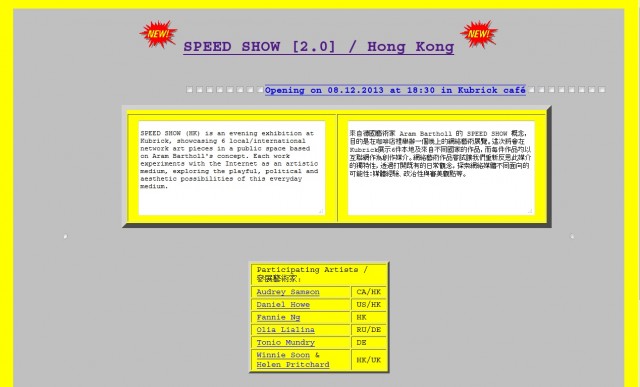 What is Network Art?

Network art could be described as artworks that use the Internet as a specific medium. Just as painters use a canvas and a brush, net artists use the Internet and write computer code. Often, network artworks make us reconsider the Internet (both technological and cultural), exploring the playful, political and aesthetic possibilities of the medium, rather than just that ‘thing’ we use everyday.

The SPEED SHOW is a concept initiated by German artist Aram Bartholl in 2010. The idea is to turn a public place like a cyber/internet café into a gallery space, an evening exhibition for browser-based network art. Nearly four years later, the Internet has been embedded in our everyday practices, most people have Internet access on their smartphones, and Internet cafés are becoming a thing of the past. In Hong Kong Internet cafés have all but disappeared. How does one create a SPEED SHOW if there are no existing public places dedicated to browsing the internet?

We propose to think of the entire city as a possible canvas and focus on public spaces dedicated to loitering and discussion, an environment we hope will incite discussion around network art. Since the 90s, many net artists have been experimenting with the Internet as an artistic medium and explored its characteristics.

Kubrick is a locale comprised of a café, a bookstore, and an art space. Most people bring their laptops to work there. By adding computers showing network art pieces, we transform the space, adding points of interest in this milieu. People in the café use the Internet medium, perhaps without paying much attention to its materiality. The SPEED SHOW focuses on this pervasive medium, looking beyond our habitual usage and its commodified framework, to its nooks and crannies, its textures, and its affordances. The SPEED SHOW turns the Kubrick hot spot into a temporary playground, transforming/translating web and cultural data in real time.